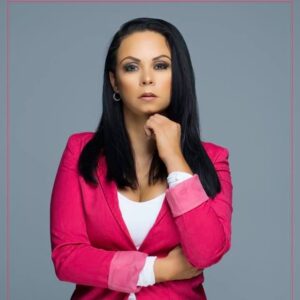 Louanna Faine is one of Arizona's premier Television, Radio, and Web Based personalities. Originally from New York, Louanna's ambitious personality led her into a career in journalism. She successfully obtained multiple associate's degrees in Arts related fields while laying the foundation for what was to come with her career.

Louanna's achievements are even more impressive given her difficult childhood. At the age of four, her mother, a drug addict, sold her to obtain money to fuel her addictions, repeatedly abandoning Louanna for days at a time. This abuse continued for three years, until she died in a drunk driving accident.

Now nearly seven years old, Louanna was sent into foster care. Unfortunately, rather than being a fresh start, this opened her to what would be years of continued emotional, physical and sexual abuse at the hands of her foster parents and siblings. One foster parent, aided by Louanna's father, conspired to steal her identity, her social security checks, and the settlement from her mother's car accident.

Louanna eventually moved into a group home. Living there, she had little access to regular meals, appropriate clothing, or even basic toiletries. After nearly being killed by a family member, she hitchhiked to Rochester, New York. Defeated and suffering from post-traumatic stress disorder, she lived with a friend who was enrolled in college. Slowly, she began to recover, beginning to rebuild her life and her confidence by applying to college herself.

Early in her career, and during her years while continuing to further her education, Louanna could be heard on 1280 AM radio hosting the "Messiah Music Mix". She also played a pivotal role in coordinating such events as the first ever Educational Platform of Excellence, various local NAACP events, several athletic events, and more. Her name quickly spread with the creation of the 4.1.1 Effect. The 4.1.1 Effect brought together local vendors, businesses, and organizations; helping to rebuild and redevelop Phoenix's economy. This extremely popular endeavor solidified Louanna's place in Arizona's marketing and social networking circles.

Louanna graduated in 2011 from ASU's Walter Cronkite School of Journalism with her Bachelors in Broadcast Journalism. She immediately went to work on her most personal brand. Real Talk Enterprises was established as a media company from which she was able to use prior experiences, skills and educational training for promotions, event planning, and social media networking/marketing. Through her enterprise, "Real Talk with Louanna" was born.  "Real Talk with Louanna" quickly rose to fame, “Changing Lives One Story at a Time through Real Journalism.” Louanna interviewed countless pivotal and influential people from around the Valley, as well as many celebrities; such as DMX, Dr. Farrah Gray, Lil Flip, Rass Kas, Da Truth, Kirk Franklin, Yolanda Adams, Sinbad, Larry Fitzgerald, Kurt Warner and many more. While still running a successful show, Louanna continued to elevate her name and brand by co-creating and assisting in other endeavors. Louanna played an important role in the development of Radio Supa and co-creating SupaVision TV, helping to solidify local, national, and international advertising for the brand, in addition to growing their social media presence and fan base.

In 2014, Louanna became the latest female radio personality in the Valley through her role on 101.1 F.M. "BeatLocker" radio show alongside Pokaface and DJ Marvel. Her continued success earned her the role of the host of "AZ In The Know." Her already proven track record again made this show a marketable success story, having grown from an idea to having an average of 7,500 - 10,000 viewers per episode. In May of 2016, AZTV (KAZT-TV) welcomed "Real Talk with Louanna" to their network family, taking her show from web based to television average of 10,000 - 20,000 viewers per episode. Louanna also joined the Arizona Informant as their digital reporter. In 2019, Louanna launched Media Queens, an all-female collective of digital content creators, influencers, and entrepreneurs.

The Real Change Foundation is the culmination of Louanna's journey to reclaim her voice and use her story to help children across the country recover from the abuse experienced in the foster care system and as victims of sex trafficking. Having experienced the horrors of childhood abuse first hand, Louanna seeks to improve the lives of children in the system by providing them with access to toiletries, clothing, mentorship and a vision of how they can emerge from the system prepared to take responsibility for their own futures. The Foundation's annual fundraiser, What If Christmas Forgot About You? is now entering its seventh year.